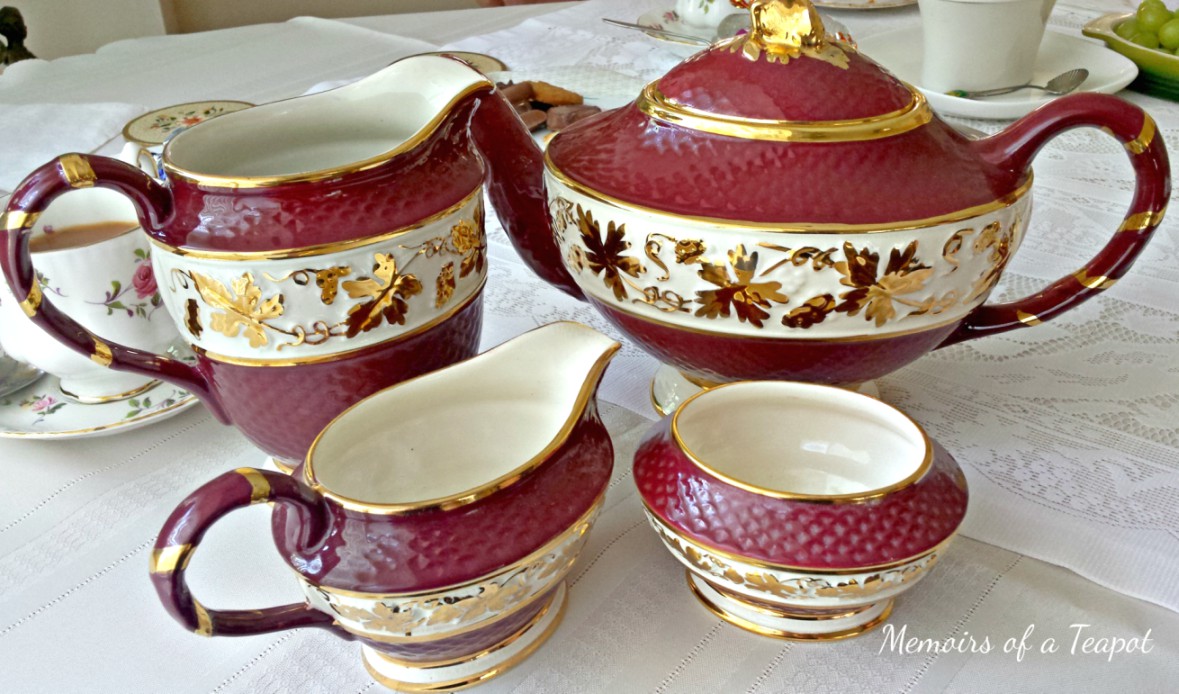 Ever since An Ornament’s Story, I have planned to do a post on the Rubytone tea set owned by one of my family members and mentioned in the article. But sometimes, information can be incredibly hard to come by! So while I haven’t filled in all the gaps about the set that I’d like to, I thought I’d share my progress so far.

The Story So Far

Bought for a Sydney wedding, this Rubytone tea set was lay-buyed for several months by a loving relative of the prospective new couple. The year was 1957.

60 years later, I am attempting to find out more about this tea set. I’d like to answer these questions: where was it made? Who made it? Why it was made and designed as we find it?

I began by looking closely at the tea set for clues. You can see from the image above that the set includes a large tea pot – I’m guessing large enough for 8 or so cups of tea, – a creamer, a sugar bowl, and a milk jug. The base colour is white and it is decorated by a band of gilded grape leaves situated between bands of bevelled burgundy. It’s quite a striking design isn’t it! I next looked at the base of each item to find the mark, in this case painted in gold. This tea set comes from England, made by a company called Wade. 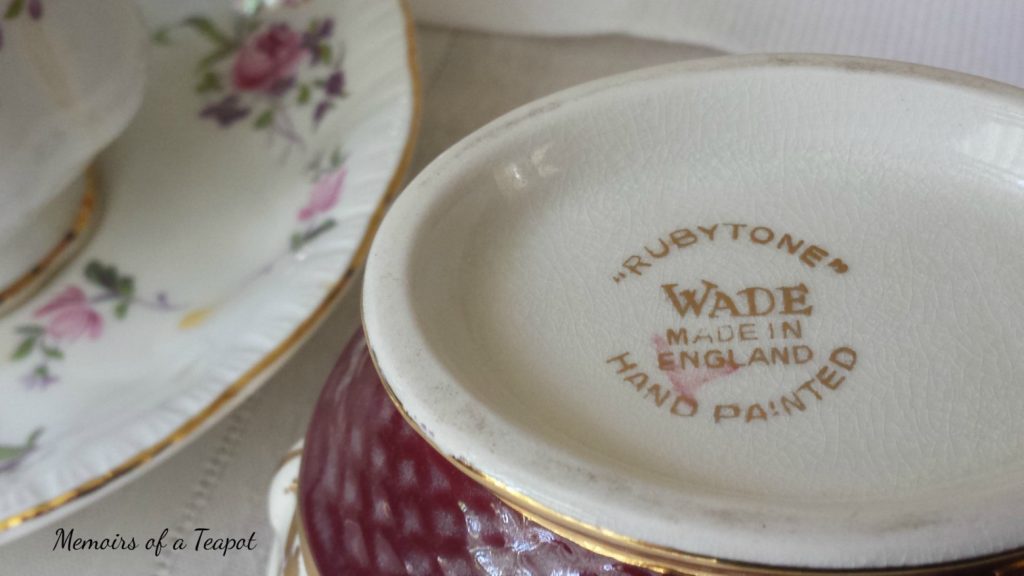 Wade Ceramics is still a functioning business despite having origins way back in 1810. Their first pottery was located in the Potteries region in Stoke-on-Trent, England. The company’s website has a nifty little video about their history which you can find here. I also found a list of pottery marks used by Wade Ceramics over the decades. The design and mark on the Rubytone tea set indicates that it was created c. 1953 by a branch of the company known as Wade Heath.

It seems that Wade Ceramics has had many branches, many names, and the management of many family members. The company’s potteries have also been located in a variety of locations within England and Ireland over its lifetime. The interchanging managers and branch names is pretty confusing! Perhaps this is one reason why there is so little online information about the company and their products. While I spent time digging further into the branch, I couldn’t find anymore on the Rubytone tea set. 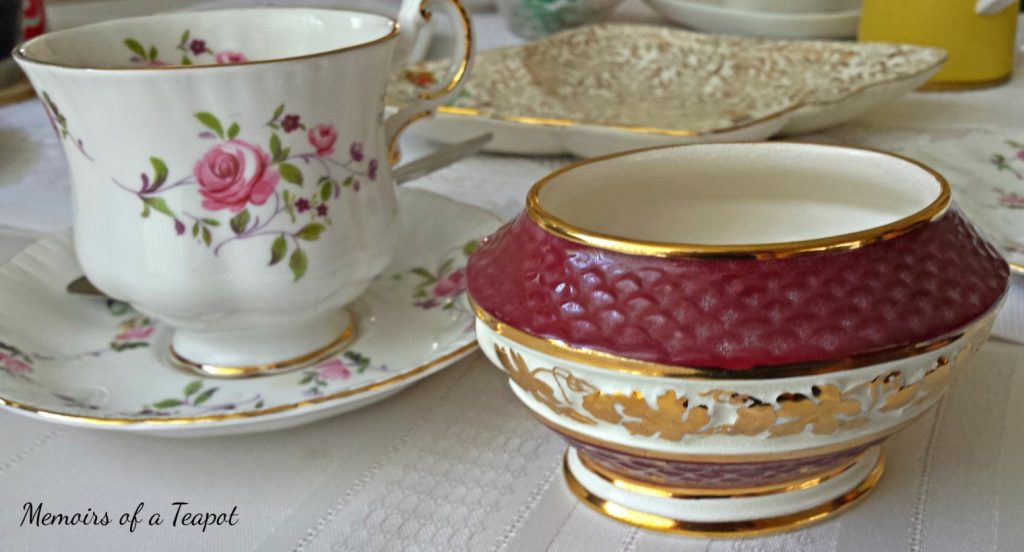 Next, I investigated the place where the tea set was bought. All I had to go on was the name of the store – Saunders – and its location on King Street, Sydney CBD. Happily, it seems to be much easier to find information about the store than about the tea set sold from it! Saunders Ltd Jewellers (and Optometrists) were located on the corner of Pitt and King Street (numbers 142-144) from 1935 (see page 16-18 for more info about the company). This sandstone building was built in the Victorian era, used to have a tower, is now heritage listed, and was just one of the company’s Sydney stores.

Adolph Basser, the owner of the company, was of Polish origin and was later knighted by the Queen Elizabeth II for giving generously to charities. While the store primarily sold jewellery, watches, and silverware, I have found newspaper advertisements that indicate stock lists also included binoculars, leather wallets, cutlery and chinaware. It also undertook ear piercing. Clearly quite diverse! The company later merged with Angus and Coote.

From the Catholic Press (1936); a short advertisement about Saunders, including their wares and company history.

I’d still like to find out more about the design history of this Rubytone tea set. My next lead is the 1955 Saunder’s Gift Book held at the National Museum of Australia. Perhaps the tea set will be included. Stay tuned and wish me luck! 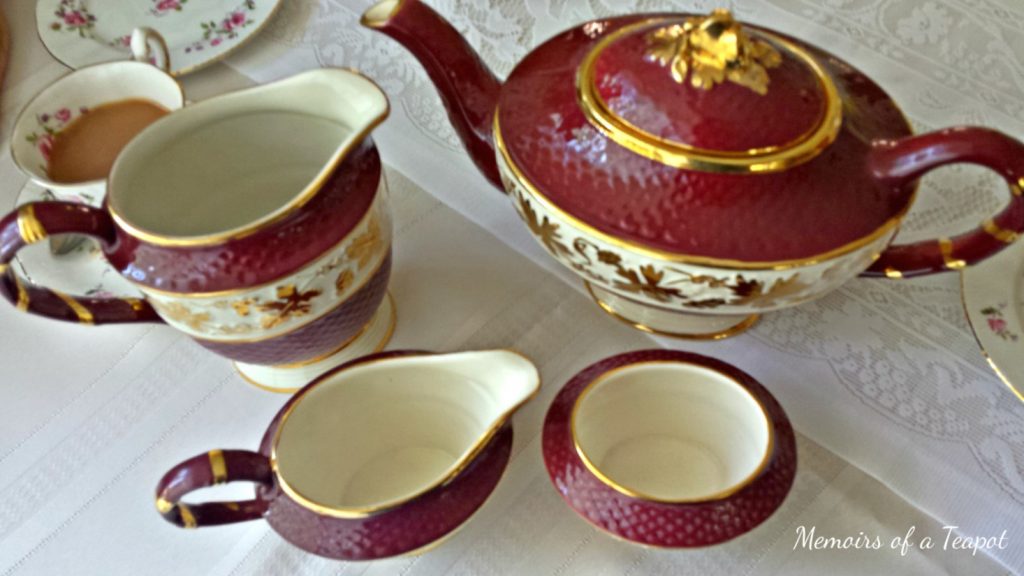