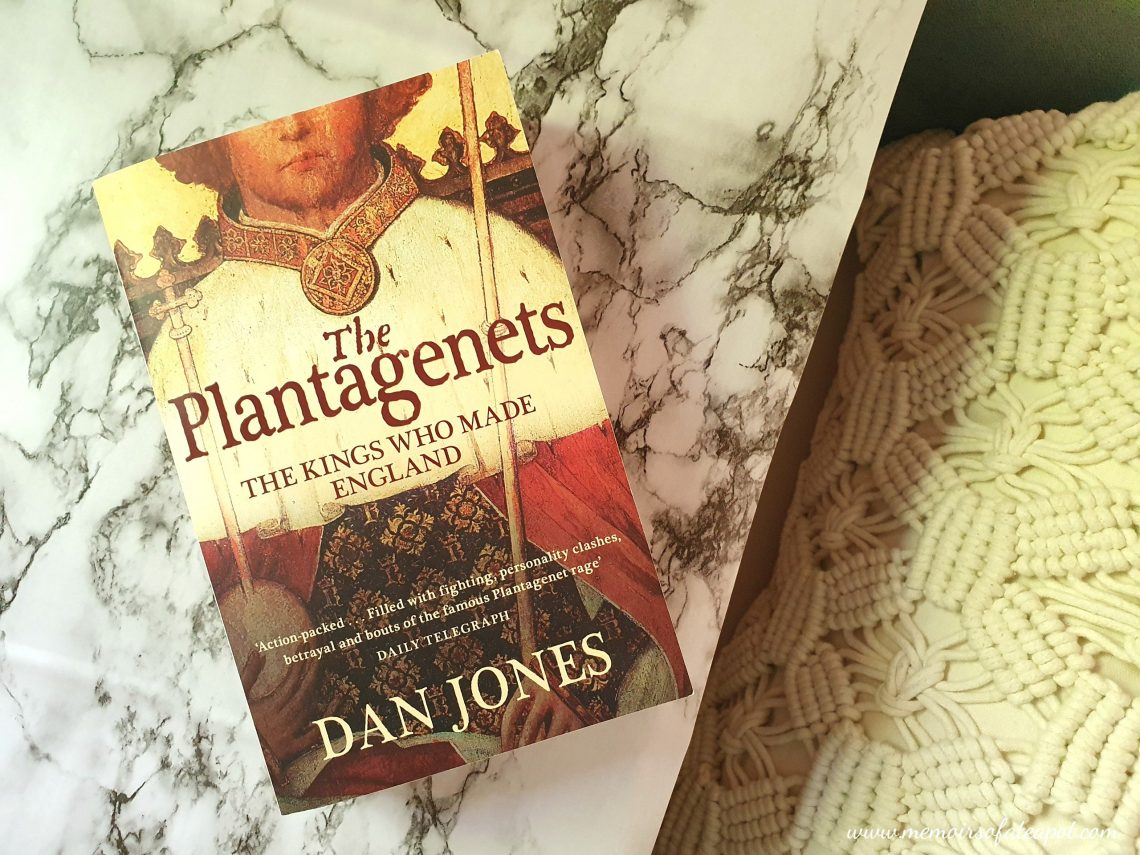 I hope you’re all keen readers because I have another book review offering for you! Today, I’m reviewing The Plantagenets: The Kings who Made England by Dan Jones. It is a book of historical non-fiction which was published a few years ago in 2013.

This is the first time I’ve read a book by Dan Jones, but it’s not the first time I’ve heard of him. I really enjoyed his TV series called Secrets of Great British Castles and I’ve heard a few of his podcast interviews. I’ve found that he presents history in a way that makes it clear how history is relevant to the present and likes to have fun in the retelling of it.

I am not particularly familiar with this period of history or the Plantagenets. If you’re like me, the Plantagents were the dynasty that ruled England after the family of William the Conqueror (The Normans) but before the Lancastrians. Think the years 1154 – when Henry II took the throne – to 1399 when Richard II died and his cousin Henry Lancaster or Henry IV was the first of the new dynasty.

The Plantagenets starts with the death of William the Conqueror’s heir William ‘Rufus’ and the accession of his next son down, Henry I. It then gives a contextual retelling of the civil war between Henry’s daughter Matilda and her cousin Stephen. Matilda married Geoffrey Plantagenet and had Henry II who eventually was made Stephen’s heir and heir to the kingdom of England. And that is how the Plantagenet ruling dynasty began.

Jones then tells the story of the seven following Plantagenet kings, including the ‘big names’: Richard the Lionheart, Bad King John, and Edward Longshanks. Jones discusses what they did, what happened during their reigns and investigates why they made the decisions they did. The presented interpretation of the way they ruled doesn’t just settle for the accepted or popular views of these monarchs but seeks to look deeper.

Dan Jones writes about every single Plantagenet ruler which gave me a broad understanding of the family quirks. It seems to me that the Plantagenets were often great warriors but many also let power go to their heads. Plantagenet kings could often be abrupt and quick to anger. I’m not sure I would actually like to meet many of them! But they make for fascinating rulers to read about and to consider how they and their personalities shaped English history.

The Plantagenets challenged my understanding of several of the famous rulers of the dynasty. I never new that Richard the Lionheart spent most of his life away from England, for example. He spent a lot of his early life living in his mother’s duchy of Aquitaine (in France) and his later life fighting in the Crusades or fighting, again, in France. He also taxed the English people heavily in order to pay for his wars. So it’s curious that he has such a positive legacy. It seems his renown was mainly based upon his success in battle rather than whether he was a competent ruler of his people.

How they Re-used the Past

I also found it fascinating how Plantagenet kings re-used history for their own purposes. For example, Henry III looks to the example of Edward the Confessor as a model of how to rule and Edward I resurrects Arthurian legends to support his right to rule the Welsh. Using the past to make contemporary arguments is something that is still often done today. I was reminded of how important it is that we study history so that we can understand how the past is being manipulated to suit current agendas.

While Dan Jones’ focuses on the Plantagenet rulers, their queens are discussed as well. Eleanor of Aquitaine was the ex-wife of French King Louis VII, wife of Henry II, and the mother of Richard the Lionheart and John. She had a fascinating handle on and control of politics for the period. Given how much she seemed to be involved, I would have loved to read more about her in The Plantagenets. In fact, I would like to know more about many of the queens mentioned in the book. For me though, Eleanor was the most striking and the most audacious. After reading about her, two podcasts published episodes on her life – just my luck! You can find them on History Extra (Dec 13 2019) and History Hit (18 Dec 2019).

Should you Read It?

Great book, great read! This is a book for everyone who loves history but doesn’t want to slog through an academic treatise. That said, it’s not a complete walk in the park and isn’t something you can rush through in long sittings. I found that reading it in bite sized chunks allowed me to process the historical events much better. I also kept a post-it note in the family tree section to easily refer to when I needed to keep track of who was who. With so many Edwards and Henrys, the family tree kept me up to speed.

I think that this book is an ideal introduction to this period of English history. So if that’s what you’re looking for, this is a must read! I’m pretty keen now to read Dan Jones’ book The War of the Roses to learn about what happened next. If you’ve read it already, let me know your thoughts about it and The Plantagenets in the comments!