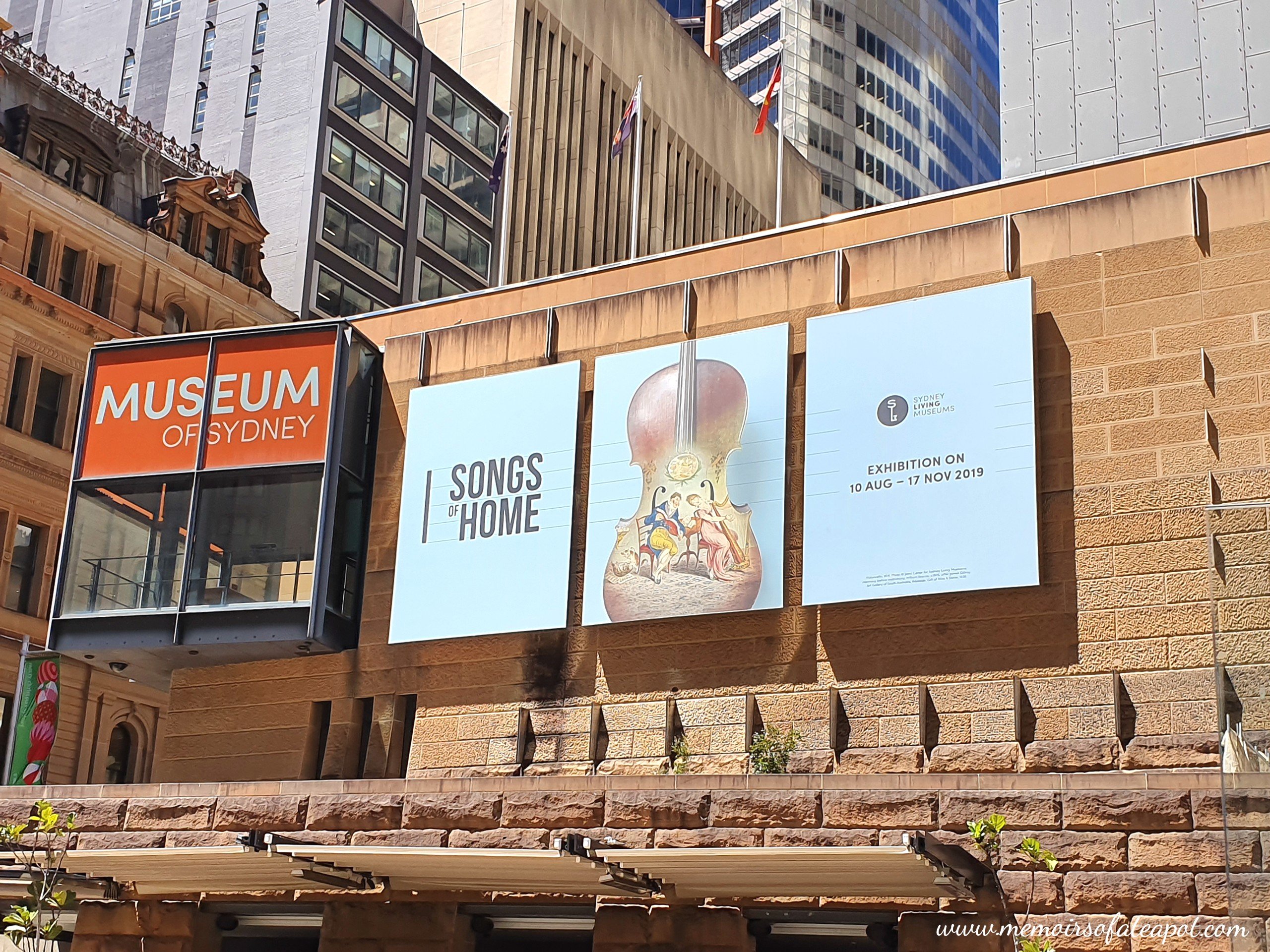 A couple of weeks ago I visited Songs of Home (2019) an exhibition held at the Museum of Sydney. It has now finished but I have so many pictures and stories to share with you from it.

Songs of Home is a celebration of Australian music and musical traditions from before colonisation in 1788 and beyond. It is not your traditional exhibition. As you view objects and text panels you also listen to a variety of songs which are relevant to the artefacts or discussed in the panels. About five of the songs have been specially composed for the exhibition by contemporary artists. You can listen to these plus all the tracks featured in Songs of Home online; all 60 of them!

As it turns out, I have so many objects and songs to share with you from Songs of Home that this post needs to be split in two. You’ll have to wait in anticipation for the second post! But for now, here are my reflections and highlights from the first half of Songs of Home 2019.

This type of exhibition is great for a solo outing – you have headphones on the entire time. And if you try talking to someone you may deafen everyone else in the room! It was quite novel receiving headphones and an Ipod Touch which you hung around your neck on an orange lanyard. I am definitely keen to see another exhibition using sound to accompany visual and textual sources to convey historical information and the atmosphere of the past.

Quite appropriately, the exhibition begins with a traditional piece which is a Barabul-la clan song. The specially composed contemporary pieces in the exhibition are also composed by Indigenous artists. I was a bit disappointed though that I didn’t see artefacts from Indigenous musical history.

Very soon after entering the exhibition, I found myself quite confused. Where do I listen to Track 1? The track numbers were buried right at the bottom of the text panels in small print. I thought this a bit strange given that the music itself was a key part of the exhibition (no pun intended)! Your progression through the exhibition was also confusing. The track numbers moved you to the right to left and then left to right and back again. At some point I gave up following the track order and looked at each exhibit area according to my own whimsy.

These thoughts did nothing to diminish my overall enjoyment of the exhibition however. I thoroughly loved listening to the musical tracks while exploring the objects and texts covering the two rooms. Here are my highlights from the first room.

Below is an impressive display of a spinet and opera dress. What is a spinet you may ask? It seems it was the cheaper and more compact version of an harpsichord. This opera dress is from 1760-70, is decorated with oriental embroidery and is the most brilliant blue. I love it!

You might be wondering what these nondescript objects are. So did I! Both objects were found at Hyde Park Barracks, Sydney which was a convict barracks for several decades. The object on the right is part of a convict shirt but the object on the left is known as a Jew’s harp which is a type of whistle. You are supposed to be able to hear it in Miss McLeod’s Reel (1850’s). But I can’t distinguish it from the button accordion also featured in this track! See how you go. In the 1800’s even a down and out convict could play and enjoy music.

‘Treading Water’ was composed specifically for Songs of Home. It is composed by contemporary musician Nardi Simpson and is one of my favourite tracks. I love the use of traditional clapping sticks with introduced European instruments. If you like this piece, check out Track 11 by Troy J Russell as well. It is inspired by the journey of Bennelong of the Wangal people back from England to Australia in the late 1700’s.

After the opera dress, this barrel organ is my next favourite object from the first room of the exhibition. It has such an unusual sound (see Track 24) that it is intriguing to imagine it playing on the streets of Sydney in the 1800’s. The past was full of sound, and that is what is so compelling about this exhibition. Music, creative musical expression and appreciation of song crosses barriers of time and culture.

The Barrel Organ is the last object in the first room of the exhibition. So in my next post, Songs of Home Highlights II, I’ll include all my favourites from room two! So stay tuned for my next post. In the mean time, let me know in the comments below whether you visited Songs of Home and what your highlight is! You can also check out some of my other Exhibition reviews: