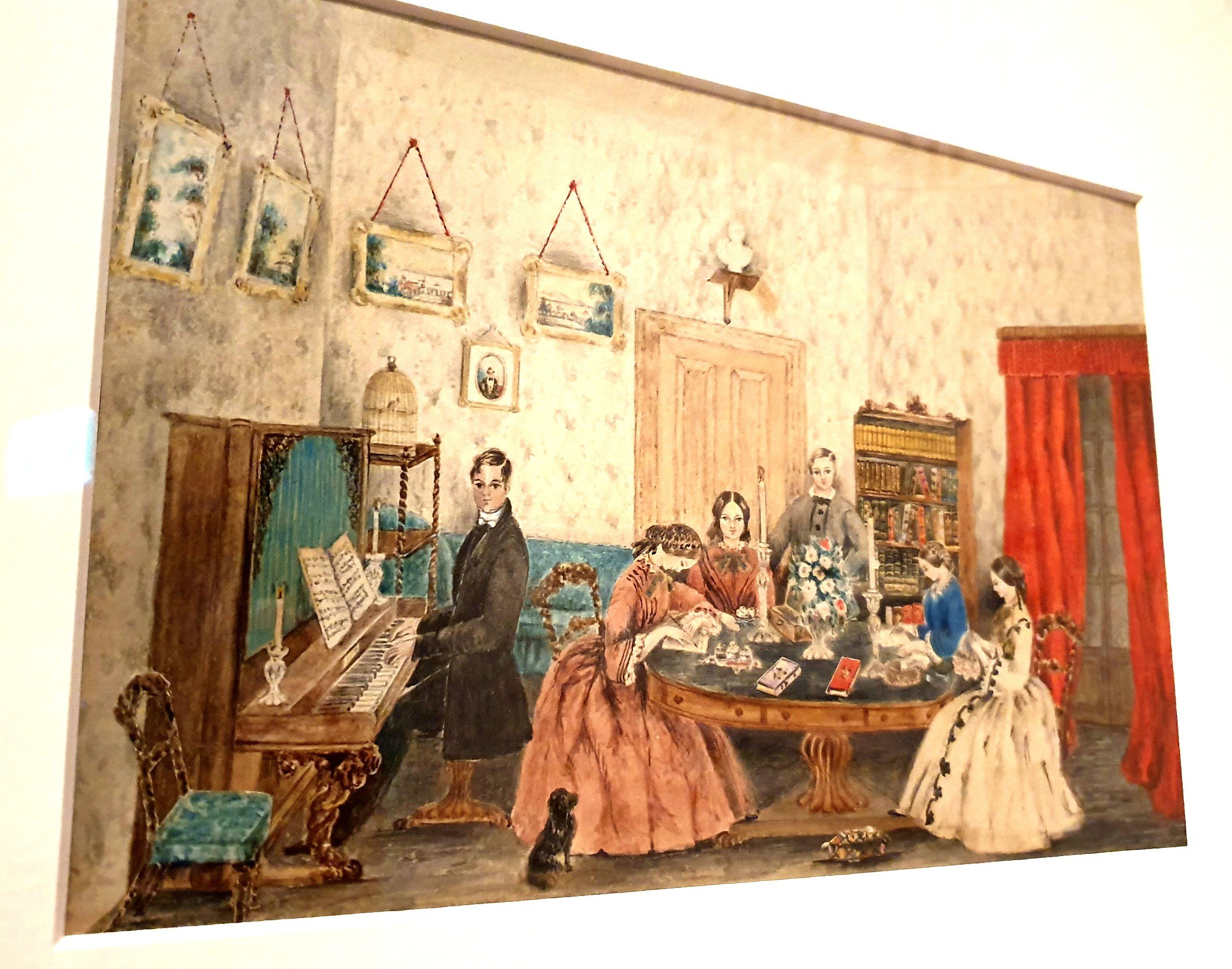 Recently, the Museum of Sydney held an exhibition called Songs of Home fall about Australian musical traditions. I found that I had so many interesting artefacts and songs to share with you from the exhibition that I split my blog post in two. In Songs of Home I, I explained the premise of the exhibition and chatted about my highlights from its first room. So hopefully you’ve been eagerly anticipating the second half since then! This time we’ll move on to my favourite objects and musical tracks from the second room of Songs of Home 2019.

What better way to start than with hand written music by Jane Austen herself. This is a thrilling artefact for inclusion in Songs of Home, purely because Australians don’t get too much exposure to Jane Austen and her belongings bar the modern copies of her novels and modern film adaptions. The song transcribed with Jane Austen’s hand on the left is called The Soldier’s Adieu (Track 27) and the one on the right is The Duke of York’s March (Track 28). The exhibition also included 1813 editions of Pride and Prejudice and Emma, so excitement all around!

This collection, pictured below, surprised me. I don’t know why I should have been surprised, but it seems there are actually more Australian stately historic homes than even Australians realise! The Murray family owned and used the musical artefacts in this display. They had an estate in Lithgow, which is on the other side of the Blue Mountains, inland from Sydney, called Warrawang. This is the piano that the family brought out with them from Scotland in 1843. If you check out Track 33 you can listen to a song found in the Murray collection called ‘My Love She’s but a Lassie Yet’. It’s an amusing one. If you’d like to know more about the Murray family music collection you can read this article by the ABC.

The cello of the famous Elizabeth Macquarie, wife of the equally famous (in Australia and NSW at least) Governor Lachlan Macquarie. Apparently Elizabeth never played, which may be why she gave it away when she left Sydney. While I call it a cello, it would have been called a violincello at the time. At some point since then similar instruments are just called cellos.

This instrument is a physharmonica and is the saddest sounding instrument in the exhibition. But don’t take my word for it! You can listen to a rendition of No. 9 Lento (Track 41) played on this instrument and decide for yourself.

Here we see a replica of a bonnet which is likely to have been owned and worn by Elizabeth Macarthur, wife of John Macarthur. Accompanying it, is her (possible) portrait as a young lady before her marriage. Given the unconfirmed provenance of these artefacts, I probably should have included the photo that included a letter definitely written by Elizabeth! But you can find many of her letters online. You can also read more about the Macarthurs in my post about Camden Park House.

Now while I said that there are more historic homes in Australia than you might expect, there are also many that no longer exist. This is one such one that I am sad that I can’t visit. The house depicted in this book is the Villa Henrietta (1822-1850). It was located on Point Piper in Sydney and was owned by the Piper family. Mary Ann Piper, the mistress of this house, was the one that received the violincello from Elizabeth Macquarie.

The Rouse family of Rouse Hill House and Farm in northwestern Sydney loved music. The house still stands, and contains much of the family’s mementos, furniture and everyday items. In the photo you can see the family’s mechanical music box and the receipt for its purchase. The music box plays the Zampa Overture (Track 43). There is also a music stand which is curiously called a ‘Canterbury’.

Below is an example of a double action pedal harp (Track 46) which was made in England in the early 1800’s and soon after found itself in Australia. Next door to it is the costume worn by Dame Joan Sutherland, a famous Australian opera singer. She wore this dazzling number for her 1977 performance of Lucrezia Borgia (Track 47). Even from the back seats of the Sydney Opera House you would still have been able to see the bling – a job well done on the part of the costume designers I think!

The visitor’s final task of the exhibition was to record a favourite musical track from Songs of Home on a demi-semi quaver and hang it upon a gigantic stave. Of course, I took this photo with the selfie camera, so my song of choice is backwards. Face palm. So since you can’t read it properly in the photo, my favourite song is Hard Times/Campdown Hornpipe originally composed in 1855 and performed by Rhiannon Giddens and Francesco Turrisi. I’d love to know what your favourite tracks are from Songs of Home too, so please share below!

Songs of Home I