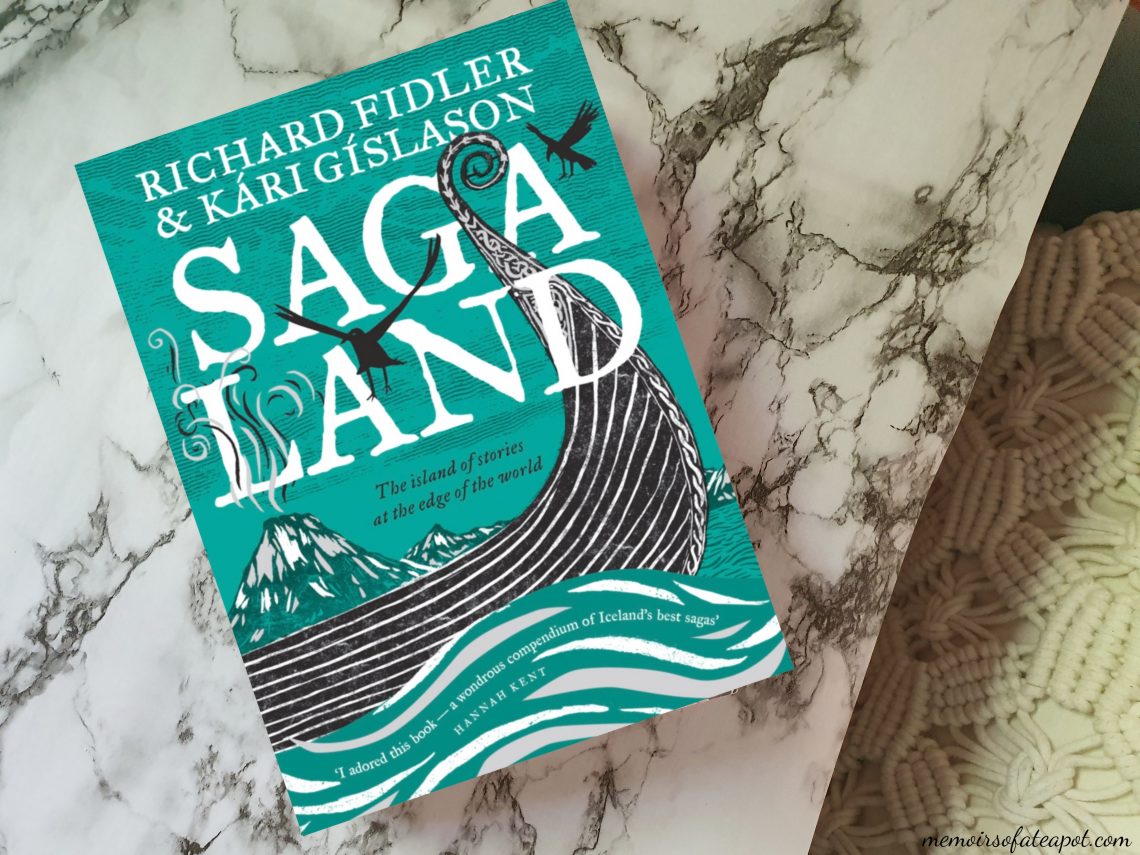 Sagaland has a very striking cover. It is a glacial ice blue with white letters. So it had caught my eye a few times in my local book shop. Earlier this year, with the pandemic providing me with more time to read and books being an excellent means of a bit of escape, I decided to read it. I found it on my local library’s app and dove right in. Sagaland is a non-fiction work by Richard Fidler and Kari Gislason and I’m looking forward to telling you my thoughts about it in this review.

Sagaland is a deep dive into Iceland. It retells the Icelandic Sagas stretching back to the 10th century, it describes a journey into family history, and it presents a view into Iceland’s people and culture.

Australian-Icelander Kari Gislason once struck up a friendship with Australian journalist Richard Fidler. They were both fascinated by the Icelandic sagas and so they decided to embark on a two week trip of Iceland. While there, they retold and recorded the sagas in the places where the events they described actually happened. During this time Kari also intended to find out more about his family’s connection to one of Iceland’s most famous poets and politicians, Snorri Sturlusson.

Snorri lived in Iceland during the 12th century AD. He was a cunning and conniving politician, but he also compiled, retold and recorded in the written word many famous Icelandic sagas. In Sagaland, Kari uses this trip around Iceland to find out more about whether he is related to Snorri or not based on a passing comment made by his father many years before.

I really loved the conversational tone of this book. Sometimes a chapter is told by Kari and in another you read about the journey in Richard’s voice. They tell of their personal experiences of living in and visiting Iceland and share some fascinating quirks of culture in the last 40 years or so. I have never been to Iceland, and I can’t say know much about the place. But this book gave me a taste of Iceland; its history and people.

Throughout the book there are re-tellings of Icelandic sagas. These are incredibly fascinating to me because of the history that they relate. I’m currently studying early medieval history in England, and there are little to no accounts of ordinary people. Yet the Icelandic Sagas record so much information about individuals’ lives in a small country not too far from there.

The sagas record long lost ways of life as well. From an historian’s perspective, this gives us so much insight into the past! Apparently many Icelanders can trace their lineage all the way back to the Viking period because of these sagas. I think this is pretty impressive. But the stories are more than just an historical record. Kari and Richard show that the Sagas are about a connection to the land as well as a way of understanding the world.

Why Should You Read It?

If you are interested in family history, Icelandic history or Iceland itself, I highly recommend Sagaland to you. Yes it’s quite thick, but it is incredibly easy to read. The stories flow from one to another and you lose yourself in it. There’s also plenty of variety. One minute you read about the reflections of Richard on his first visit to Iceland. The next you are deep into the story of an Icelandic family who is caught up in a inter-family feud. The next you find out more about Kari Gisalson’s quest into his family heritage.

If you’ve read Sagaland or another book by Richard Fidler, I’d be keen to find out your take on it. Please feel free to leave a comment!

Why Study History? A Reflection.