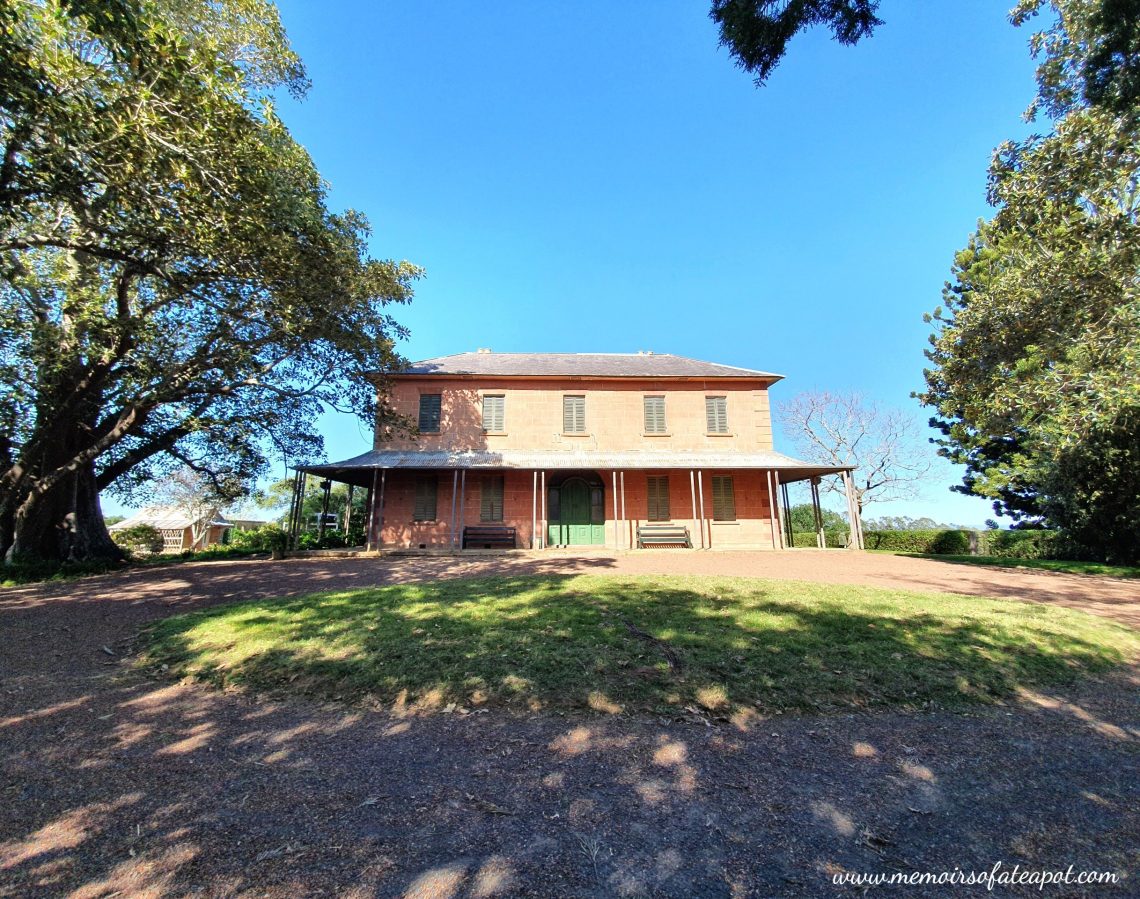 Rouse Hill Estate is probably my favourite historic place in Sydney. It is run and cared for by Sydney Living Museums but is still closed at the moment due to the pandemic. Given this, I thought I’d share some photos from my previous visits and some anecdotes about the site. If you’ve been following my social media accounts, this post might also explain why pictures of Rouse Hill Estate keep popping up all over them!

Where Can You Find It?

Rouse Hill is located about an hour’s drive from Sydney’s CBD and another 45 minutes drive or so to Windsor. From there you start heading up into the Blue Mountains. You can just see NSW’s Blue Mountains from Rouse Hill Estate; they make for an absolutely beautiful view on a clear day!

The Blue Mountains are actually part of the reason why Rouse Hill Estate is where it is today. Richard Rouse, a free settler, was given the land here right next to the new government road from Parramatta to Windsor. Parramatta was the second centre of the British colony and this road enabled people to easily travel to the Blue Mountains. Today it is still known as Windsor Road.

Of course, this land wasn’t vacant when Richard Rouse was given it. To my knowledge we don’t know the name of the clan/s of indigenous people that lived in this area. But we do know that this site had a very long use prior to the Rouse family living here.

Richard was in charge of building the toll house by Windsor road. Here the toll keeper would live and take the payment of the toll from travellers using the road. He would then move the turn pike and let the travellers through. Not much different to today really… road tolls never go out of fashion!

The House and Land

Richard Rouse was given this 400 acre land parcel in 1813 and started building his house in 1819. At this point in the history of the colony, settlers could be given some land for free but they had to prove that they could work it well in order to be given more. Richard Rouse, while a carpenter back in England, became a extremely good farm manager living in NSW, so the estate as we see it today is a lot smaller than it was. Much of it was gradually sold as it became too expensive to maintain.

In 1824, when the house was finally finished, the land around it was already being used for cattle grazing and the like to feed a growing colony. But this was only one of his estates. Richard also had land across the Mountains called Guntawong; but I think the farmhouse exists only in photos these days.

Below, you can see the Rouse Hill Estate House from the driveway and just outside of the carriage loop. Today you can see inside the house via tour, but I’ll save some inside pictures for another post. See how the house is a bright pink-orange colour? Well hold that thought because it would have been brighter in its hey day – I have proof and will show you below.

The Rouse family lived in this house for six generations and the last family member to live there only left in 1993. This long use by the same family is something that makes this house and farm absolutely fascinating. So many people interacted with it, changed it and lived in it. So many memories must be attached to this place!

The Rouse family were particularly known for cattle farming and horse racing. They had a beautiful stable block built in 1879 by John Horbury Hunt which you can see here. It even has a steeple with a horse weather vane! They had horses that won the Sydney Cup and one, I think, that won the Melbourne Cup too. Their more famous horses included Jorrocks, Peter Pan and Viva.

But the Rouse family certainly didn’t live on this estate alone. This is an image of the back section of the house – a covered area with service rooms. The servants who worked for the Rouses could do the washing and ironing in the two rooms pictured here. The kitchen and larder are just on the other side and out of view. The house was built in the time when you didn’t connect the kitchen building to the main house in case of fire. Today the two buildings only connect because the house verandah next to the kitchen was closed in to create two new rooms.

You can also see the water pump connected to an underground tank and the back door to the main house painted a lovely dark green. As well as a service area, this space was also used by the Rouse family for large lunches and even the performance of a community play. There’s something special about the worn flagstones in this area – evidence of so many people wandering through. Whether busy doing work for the family or enjoying the family’s company at a lunch.

So if you’re wondering about the colour of the main house, take a closer look at the school house. It is located just across the road from Rouse Hill House and is painted in ox-blood red. It is the same colour as the house but painted much more recently. See how bright it is!

The school house was founded in 1888 and was sponsored by the Rouse family. It was and is a public school for local children. Although, the school now operates in a new location. The original school building on Rouse Hill Estate has one schoolroom, one small multipurpose room, and a hat room.

Why I Love It

Even though Rouse Hill is part of suburban Sydney, from here you really get the sense of being in the country. And there’s nothing like watching the cows run across the paddocks hoping for a feed! But these paddocks are not always as green as in my pictures. And life at Rouse Hill would not always have been easy with the drought and recessions that occurred.

The the site is always maintained and cared for in order to keep it as it was when the last family member moved out. This means that all its layers of history remain. All the changes, improvements, and disrepair tell the stories of many people who lived and worked in this place.

There is so much more that I could say about this place, and I probably will in later posts. It is an absolutely beautiful property and the historical atmosphere is evocative. I can almost imagine myself as a Rouse or a servant looking out at the Blue Mountains from the house.