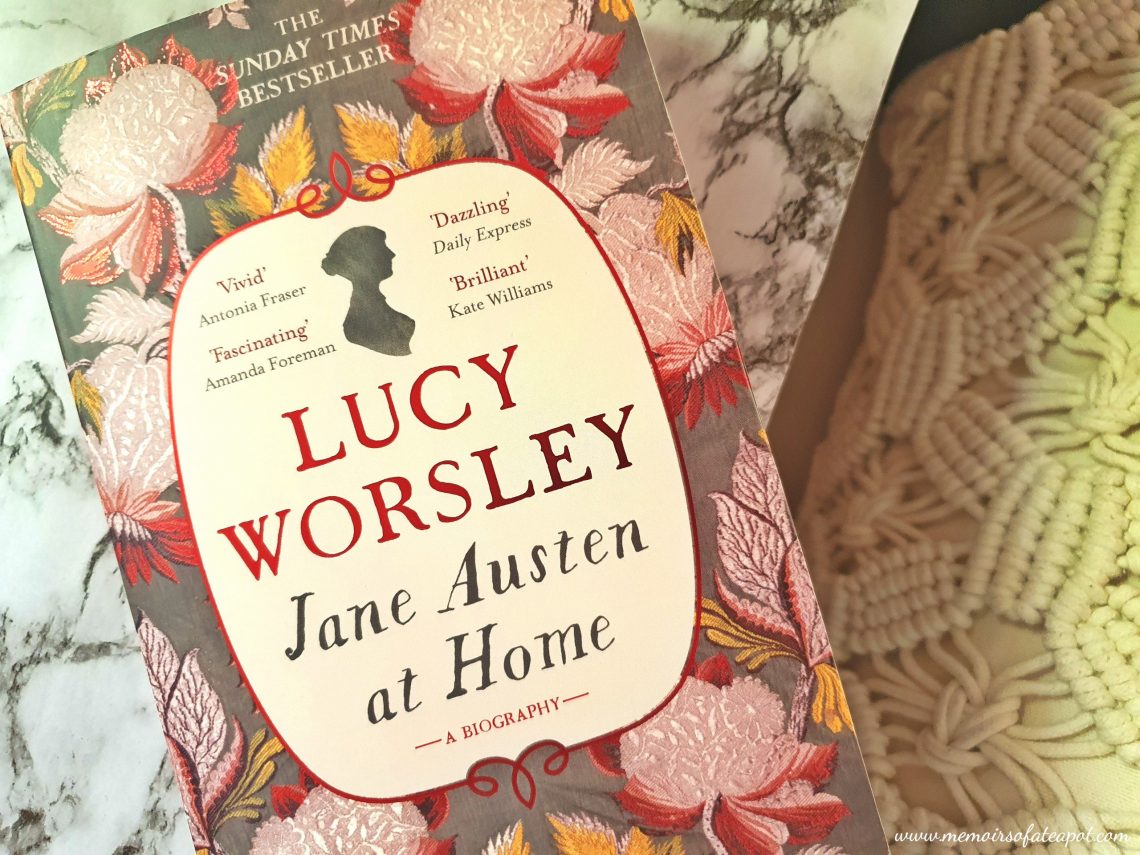 With so much more time available these days for reading, or at least motivation to immerse yourself in a book instead of the news, it’s high time for another book review! This time we’re looking at a non-fiction history book: Jane Austen at Home by Lucy Worsley. It’s been out for a few years now, but I only found out about it half a year ago so it’s new for me.

I have been a Jane Austen fan since early high school. My favourites are Pride and Prejudice and Persuasion, though Sense and Sensibility comes a close second to these. I can’t go past the BBC adaptation of Pride and Prejudice and I really like the Emma adaptation with Romola Garai. So you can imagine that when I received Jane Austen at Home for Christmas I was keen to get reading!

Jane Austen at Home is about the life, times and inspiration of author Jane Austen. Jane lived in the regency era, also known as the Georgian period after the kings of the time. She lived for 42 years between 1775 and 1817 and wrote the famous novels many people would be able to rattle off without hesitation. These have inspired so many movie and television adaptions; with Emma being the most recent. (I haven’t seen it yet, but people say that it’s good).

The author, Lucy Worsley, is the Chief Curator for Historic Royal Palaces in the UK and has written several books and been part of several documentaries. I really enjoyed her documentary series If Walls Could Talk which I have written about on the blog.

Lucy is an avowed Austen fan and writes about who she thinks Jane really was. She talks about Jane’s life in terms of her homes and the influence that a place to live had on her life and her writing. She explores the themes in Jane’s books and discusses what these tells us about Jane herself. We also find out more about her relationship with her sister Cassandra and how her father actively supported her writing even attempting on a few occasions to use his influence to get her books published.

There were several moments while reading this book that I found myself chuckling. For example the talk about ‘sensibility’ as ” a fashionable affliction for the well off” (p. 129). While Jane Austen was living in Bath there was also great popularity in “vegetal headwear” (p. 182). The chuckling was in part due to the fact that history (being the study of humans) always has the potential to be funny, and part because Lucy Worsley has such a lively and amusing turn of phrase.

So what is my conclusion on Jane Austen at Home?

But if that doesn’t convince you, I’ll share some of my other thoughts! It is well written, and better than that, it is funny and insightful. The book is also based on extensive historical research which you sample first hand throughout the book. Lucy quotes family letters, the letters written by Jane Austen herself and many other external sources.

This book inspired me to reread Jane Austen’s novels, in particular Sense and Sensibility. This novel is closely connected to a real historical idea of ‘sensibility’ that was a current reality in Jane Austen’s early life. So understanding more of the historical context really gives you a better understanding of the book. I just finished rereading Sense and Sensibility, and I enjoyed it all the more for this background knowledge.

Jane Austen at Home also does some myth busting. I thought that Jane never received real appreciation for her work while she was alive. She certainly didn’t get the accolades that she has today, but her books were well received. She was even asked to dedicate Emma to the Prince Regent when it was being published. I saw Jane’s personality in a new light too. She seemed to choose singleness and writing rather than marriage; Lucy shows that Jane certainly didn’t lack offers. She also shows a Jane who was always “joking”. Hidden amongst her letters were tongue in cheek comments that only her nearest and dearest would understand.

If you are a Jane Austen fan, the answer is most definitely yes! It is a fantastic book, easy to read and almost like a novel in it’s flow and the way it can captivate your attention. It gives you historical insight into Jane’s novels and challenges what you think you know about this famous author. While I give my recommendation in only a few words, I could effuse about it much more. It is by far the best book I’ve read for a long while.

If you’re keen to read it but can’t get your hands on a copy right now, Lucy Worsley has also created a documentary called Jane Austen: Behind Closed Doors which I also recommend. I’ve written about it on the blog and included some quick Jane Austen facts and some quotes from her letters for you to peruse at your leisure.