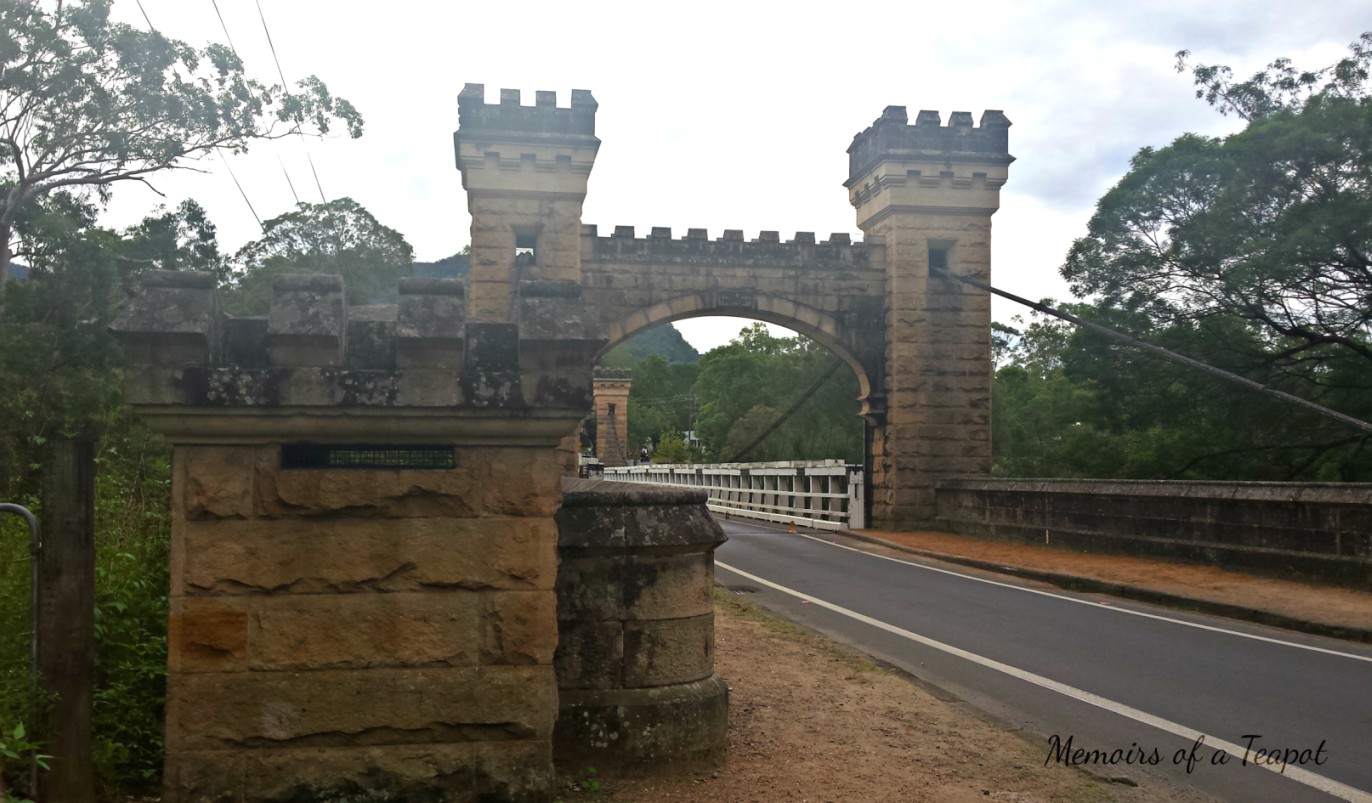 Last month, I road tripped with my family to the southern highlands region of New South Wales. We headed through Mittagong and Bowral and then made our way out to Kangaroo Valley; a tiny historic town surrounded by mountains and autumn leaves. Driving down the mountain and into the valley can be a little hair-raising but the views are certainly worth it! The valley eventually drops off and the only way across into the town is via Hampden Bridge. The Bridge has only one lane, so you need to take turns driving to and from the town. But it’s easy to imagine horses and carts making their way across the bridge in the midst of the mountain bush land. Sounds rather idyllic to me! We stopped on the roadside to take a closer look.

When was Hampden Bridge Built?

Hampden Bridge is a sandstone and timber construction which was finished in 1898. It is distinctive because of its four grand castle like turrets towering above the valley it stretches over; you can’t miss it! The Bridge opened to the public on the 19th May of that year in great pomp and ceremony. You can just imagine the day:

“After to a drive of two miles the bridge was reached. The structure was bedecked with bunting. The Minister was cheered by the school children, and a cordial welcome was extended by the residents.” 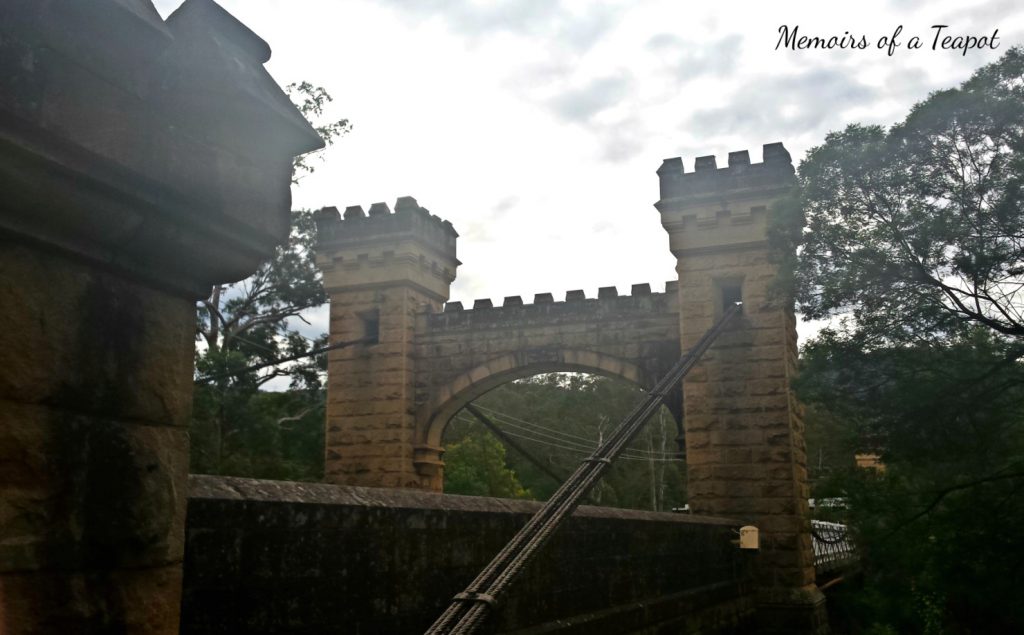 Why was it Built?

My family and I travelled by car down the winding main road into Kangaroo Valley, stopped off at Fitzroy Falls, and then meandered across Hampden Bridge into the township of Kangaroo Valley. Unbeknown to us, we were copying the route of tourists just like us from over 100 years ago.

Hampden Bridge was built to provide tourists with a route across the Kangaroo River. But it also connects the Southern Highlands to the coast and allowed easier transport of regional produce such as timber, hides and tallow (animal fat used to make candles).

“The road, besides being a mail line, is daily becoming more frequented by tourists. Leaving Moss Vale on the Southern line at a distance of 83 miles from Sydney, it passes the Fitzroy Falls at 11 1/2 miles, and three miles further begins a descent of about 2000ft., at the Barrangarry Mountain reaching Kangaroo Valley township, 23 miles.”

This Bridge was named after the Governor of New South Wales at the time, Lord Hampden. He didn’t attended the opening of the Bridge, but it was a public work after all and its castle like turrets alluded to the English roots of the colony of NSW. If you’re keen to find out more about the role of Governor of NSW in the past and currently, check out my post of Government House!

Opposition to the Bridge

What seems to me to be a beautiful historic landmark, surprisingly, has not always been particularly popular. The Australian Town and Country Journal published a feature article about a travellers’ walking tour through Kangaroo Valley in 1906. Its author wrote a rather scathing review of the bridge:

“Several miles of this and the little township of Barrengarry comes into view, and a little later the towers of the Suspension bridge which spans Kangaroo River loom up in the distance. The 8300 pounds worth of bridge may be in keeping with the scenery, but to others than Valleyites … it stands as a monument of folly of our public works system. Without going into a detailed criticism, it is sufficient to say that nineteen out of every score of visitors ask, in a bewildered tone, why such an elaborate bridge should be constructed in such a place, when a much less pretentious and, at the same time equally serviceable structure could have been erected.”

Well, according to the information produced by the National Trust found at the site, the cost of the bridge amounted to 6, 985 pounds. But even in that case the equivalent cost today would be around 833, 000 pounds or 1, 450, 000 Australian dollars! I think the author has a point, but I also think that Hampden Bridge still proves its worth over 100 years later. It is still attracting tourists; myself included!, it still provides an easy route to and from the valley, and it is still weathering the floods that can threaten the area. The Bridge’s majestic turrets also emphasise the spectacular location surrounding it. But if you haven’t yet visited Kangaroo Valley, make sure to see the Bridge and decide for yourself!

Horse Riding Across the Kangaroo River from the State Archives: 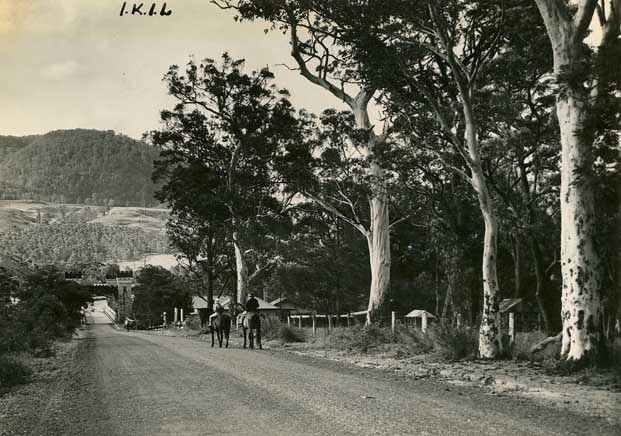 For more information about the Bridge and it’s significance to Australian colonial history head to Visit Kangaroo Valley.

Cause and Effect in the History Classroom

If Walls Could Talk: The Kitchen