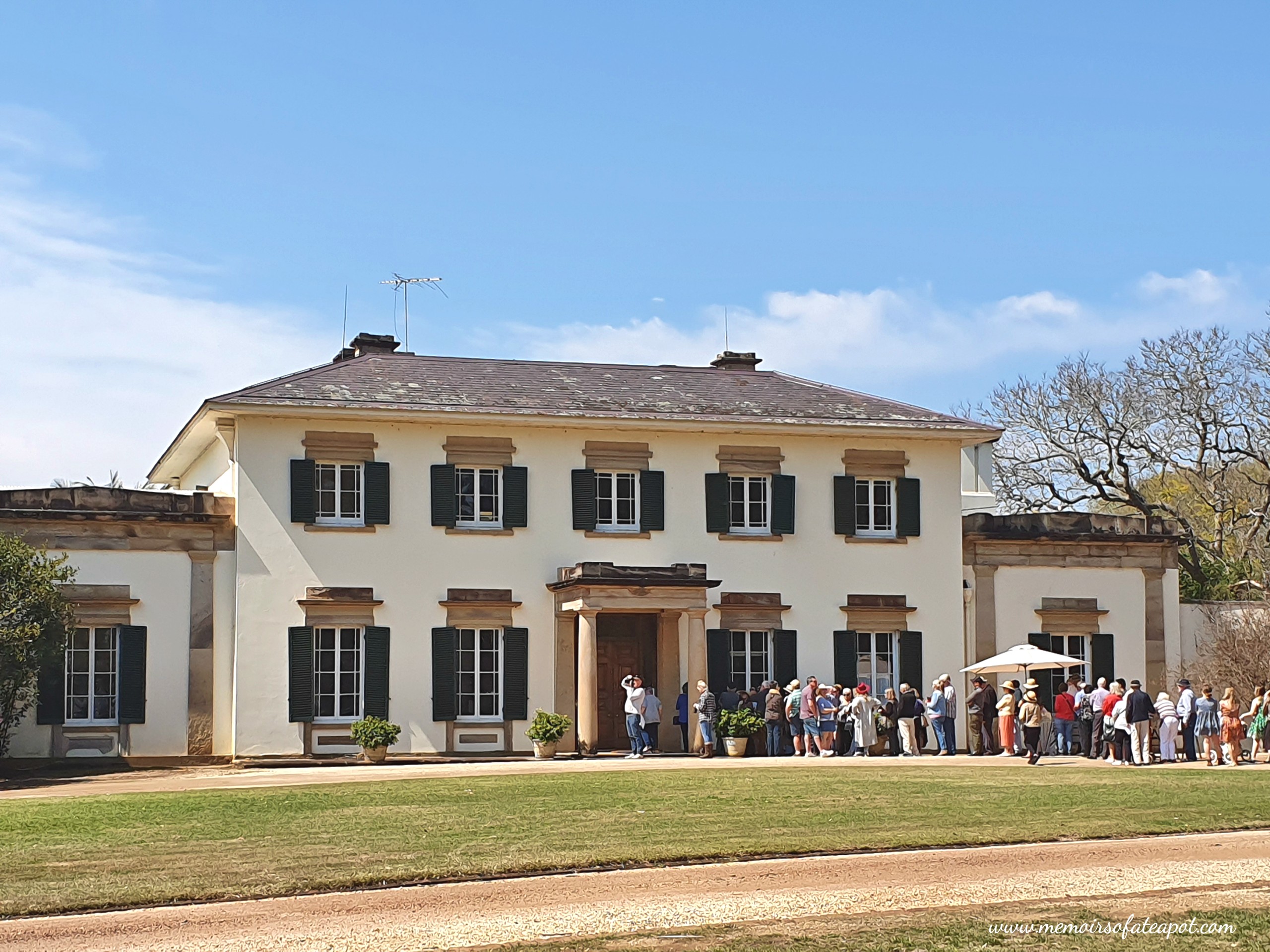 Have you ever been to Camden Park House? It is open once a year on the third weekend of September. I have wanted to visit it every year since I heard of its existence, which was about four years ago. I finally managed to get there this year and had a wonderful time seeing the house and surrounding gardens. Here is a short history of the house, memories of my visit and why you should go next year.

So why would you want to go to Camden Park? Well firstly, it is a lovely Georgian style house that is certainly a statement piece. It is dated to 1835 and is still in wonderful condition and still lived in by the family that built it. The house is surrounded by beautiful gardens for both pleasure and production.

Camden Park House was built by John Macarthur, who is famous for the production of Australian wool and his controversial political involvement. In 1789 John Macarthur joined the NSW Army Corps and travelled to Sydney Australia with his wife, Elizabeth Macarthur, and his young son, Edward. There they quickly became a very successful entrepreneurial team. They were granted fertile land at Parramatta where they built Elizabeth Farm House and invested in sheep that could withstand the hot and dry Australian environment.

John was sent back to England in 1801 for a court martial; he duelled with his superior officer… But while he was over there he showed off some of his wool samples to Lord Camden and was granted a further 5000 acres of the best land to be had in New South Wales. On his return John chose these acres from an area known as the Cowpastures, which he later named Camden after the man who gave him the grant.

On a side note; I have to share how this area got this name at all since cows are not native to Australia. In 1788, the First Fleet brought across the ocean cows, sheep and horses which were then corralled in Sydney Cove. But several cows and a bull escaped from their pens. Years later they were found in the Cowpastures region; they were no longer a few cows and bull though, they were a full herd.

In any case, on this fertile land now known as Camden , John Macarthur had a cottage called Belgenny built and began building Camden Park House. John Macarthur spent his last years living at Belgenny but never lived in a completed Camden Park House. He died in 1834 while the house was finished the year later. Elizabeth Macarthur also never permanently lived in the house. She preferred Elizabeth Farm in Parramatta, less grand but named after her. The people who made this place their home were John and Elizabeth’s youngest sons, James and William. Today the descendants of James’s daughter Elizabeth live in Camden Park House and manage the estate.

Hopefully I have convinced you that Camden Park House is a wonderful place to visit! If you’re keen, the first thing you need to do (after reading this post of course) is head over to the Camden Park House website. Not only can you find out more about the inhabitants and the house’s history, you can also find out all the details about the next Open Weekend. If you’d like to see inside the house you will need to buy specific tickets. You can also do this online on the website.

This year (2019), Camden Park House was open on the 21st and 22nd of September. The gardens opened to the public from 12 pm on the Saturday and 10 am on the Sunday. The first house tour on the Saturday was at 1 pm, and I noticed that it was probably the busiest tour of the day.

I arrived just before 12 pm on the Saturday and easily found a car park. Another point of interest: you do need to drive up a long narrow gravel road to get to the house and park in a field. So plan your transport for an off road experience! I spent the first hour or so wandering around the gardens. Not only was it the beginning of spring but it had rained a few days before, so the grass was green and the gardens were filled with vibrant colour.

At 2 pm I entered the house as per my ticketed time. First things first, Camden Park House is a private family home so visitors may not take photos inside the house. You can buy guidebooks however and you can see some interior pictures on the official website.

The house tour is not a ‘guided’ tour in the traditional sense. Instead of following a single guide through the house, you move from room to room and find a guide in each area. There is a marked out route to take as you make your way through the house as well. This meant that people could linger or hurry through as they liked. I found this a great way of speedily feeding visitors through the house while still providing a personal and informative experience. I spent about 45 minutes in the house, but you could certainly stay longer, ask questions of the guides and generally soak up the atmosphere.

Afterwards, I wandered around the garden again and visited the stalls on the back lawn. It honestly had the feel of an English garden party. There was a gelato cart, coffee and tea, a sausage sizzle, a candle stall, wood crafts, and of course Camden Park House merchandise. I decided on a nifty Camden Park House tea towel. If you head down to the Stables you can also buy a cappuccino in the pop-up cafe inside.

What do you love about Camden Park House? Let me know in the comments below.

War at the Edge of the World