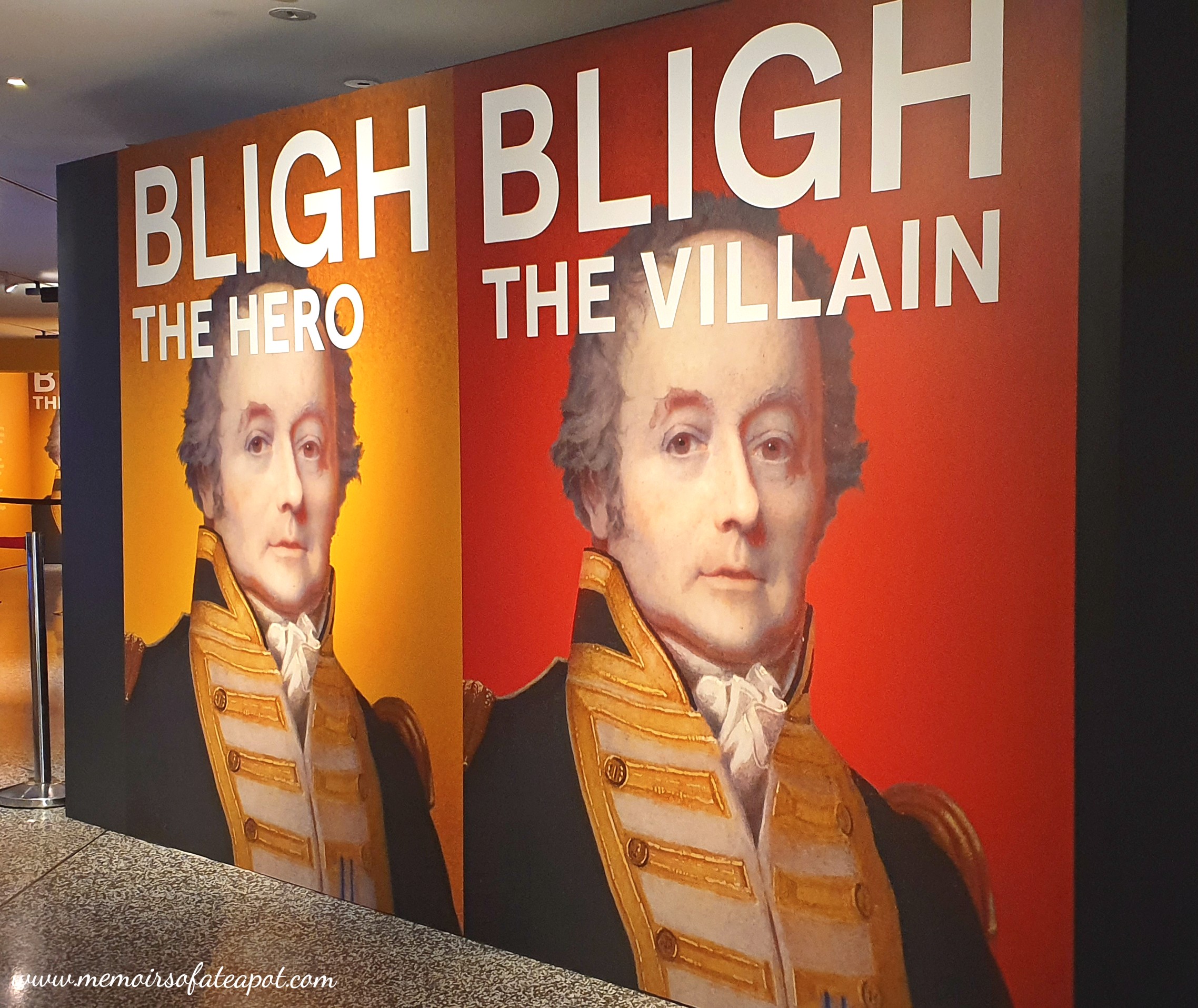 Bligh: Hero or Villain is an exhibition currently on display at the Australian National Maritime Museum. But who is Bligh? He is a part of Sydney’s colonial past but what is generally known about him really doesn’t cast him in a good light. But are our perceptions of this man truly reflective? What do we actually know of Bligh? Is he a hero or a villain?

This exhibition faces Bligh’s controversial story boldly. Bligh’s good and bad moments are interpreted twice each, in red and then in yellow. The yellow labels and information panels discuss Bligh in a positive light and the red in a negative one.

I headed into the Maritime Museum on a Friday afternoon in December with heavy smoke in the air from the Australian bush fires. The view of Darling Harbour wasn’t its stunning usual self. It was also really hot and humid – Australia in summer, what can I say? The Australian National Maritime museum though, on the banks of Darling Harbour, is refreshingly cool inside. Which is good, because concentration is difficult in humidity!

William Bligh and His Wife

This is William Bligh. His first claim to fame is that he was the Master of the Resolution Captained by James Cook on Cook’s third voyage. Unfortunately for everyone involved, this was Cook’s final voyage because he had a violent encounter with some Hawaiian locals. The event is captured on a tea tray displayed in the exhibition. Yes, a tea tray. Fancy serving tea to your friends on that.

This is William Bligh’s wife, Elizabeth. The exhibition displays a collection of shells and pieces of coral which Bligh sent back to Elizabeth from his travels. So sweet.

The Breadfruit and the Bounty

This is the breadfruit. In the late 1700’s the breadfruit became very important to the British empire since it was needed to feed slaves on British plantations in the Caribbean. The British government employed Bligh to pick up living samples of the plant from Tahiti and transport them to these plantations.

After leaving Tahiti with the plants settled in a refitted Captain’s cabin, a mutiny occurred. Bligh and his loyal crew members were forced into a boat and set adrift while the mutineers sailed off in the Bounty. Miraculously, Bligh and those with him survived. The book he wrote about this experience was met with great popularity. But as some of the mutineers returned to England, they accused him of harsh treatment and his popularity quickly diminished.

But this was not the only moment in Bligh’s life when he encountered opposition. The 26th of January has just passed, and while many celebrate Australia Day, this day is also the anniversary of the Rum Rebellion.

In 1808 on the 26th January, NSW army officers and members of landed gentry (including John Macarthur), marched up to Government House on Bridge Street in Sydney’s CBD. They forcefully entered and captured the Governor of NSW; the queen’s representative in the colony. This Governor was William Bligh. Bligh was placed under house arrest for about a year while the colony was run by George Johnson, the highest ranked military man present in NSW at the time. The Rum Rebellion is Australia’s only military coup.

Here is an example of propaganda publicised in the wake of the rebellion. Governor Bligh is pictured being dragged from his hiding place under a bed. Yet given what I discovered about Bligh in the ANMM’s exhibition, I doubt that he was a coward, and I highly doubt that he hid under a bed. Clearly he had a large number of enemies though.

In terms of the exhibition itself, there aren’t a lot of objects and it is quite text heavy. But there are books, such as William Bligh’s handwritten log books from the disastrous Bounty voyage where both ship and specially cultivated breadfruit plants were stolen from him.

It also has visual and auditory based interactives which help to break up the reading. One of these is a virtual reconstruction of the Bounty and another is a virtual map of Bligh’s chart making voyage in the Atlantic. You can examine different parts of the Bounty and see how it was refitted for the breadfruit in the first, and you can find out what sort of punishments Bligh enforced on his unruly crew members in the second.

At the beginning of the exhibition, you pick up a disc. At the end of the exhibition it’s your turn to decide. Bligh, is he a hero or a villain? Pop your disc into one of the slots to make your decision.

And just between you and me… I put my disc in the second from the left. I decided that Bligh “had his heroic moments but could also be rude, violent and impulsive.” What did you decide?